There is always a reason to read the fine print.

A 2,400-mile move west that once seemed like a chance at a fresh start, has instead delivered some hard lessons -- especially about moving from a state that recognizes same-sex unions to one of the 21 states that don't.

The couple was stunned when Ryan was dropped from the company insurance plan the two shared in New Jersey, where they were able to register as domestic partners. Idaho does not formally recognize same-sex couples.

"It didn't even dawn on us that this would have an impact," Ryan said.

At the same time, though, the company involved is playing games that can only be described as chickens--t.

A number of private insurance companies cover same-sex partners in Idaho, said Rep. Nicole LeFavour, D-Boise, who is the state's only openly gay legislator and is covered by a Wells Fargo insurance policy with her partner of eight years.

LeFavour said she called Konica Minolta on behalf of the couple and the company cited the constitutional amendment.

But of course, both sides are more than happy to blame someone or something else for the problem.
Posted by North Dallas Thirty at 5:18 PM No comments:

God Helps Those Who Help Themselves

These kind of stories are really, really, REALLY wretched.

Police are investigating an 11-year-old girl's death from an undiagnosed, treatable form of diabetes after her parents chose to pray for her rather than take her to a doctor.

She had probably been ill for about a month, suffering symptoms such as nausea, vomiting, excessive thirst, loss of appetite and weakness, the chief said Wednesday, noting that he expects to complete the investigation by Friday and forward the results to the district attorney.

The girl's mother, Leilani Neumann, said the family believes in the Bible and that healing comes from God, but she said they do not belong to an organized religion or faith, are not fanatics and have nothing against doctors.

The next time these folks read the Bible, they might want to try grasping the point Jesus makes in Luke 4: 9 - 12.

The devil led him (Jesus) to Jerusalem and had him stand on the highest point of the temple. "If you are the Son of God," he said, "throw yourself down from here. For it is written:

" 'He will command his angels concerning you
to guard you carefully;
they will lift you up in their hands,
so that you will not strike your foot against a stone.'"

Jesus answered, "It says: 'Do not put the Lord your God to the test'."

The problem with people like these is that they insist on demonstrating miracles by throwing their children off the roof.

And in my opinion, they can either give them up or accept a 24/7 court-approved supervisor at their expense.
Posted by North Dallas Thirty at 6:23 PM No comments:

Oh, You Mean You Have to WORK to Get Paid?

Suppose you have a system that has been proven to simplify the process of tracking work time without requiring employees to carry no additional badges or cards, can automate what is a historically time-consuming and paper-laden process, and can vastly reduce overpayment or underpayment from people underestimating or overestimating their time worked.

In the private sector, great.

In the public sector, forget it.

Employees at a growing number of businesses are starting and ending their days by pressing a hand or finger to a scanner that logs the precise time of their arrival and departure - information that is automatically reflected in payroll records.

The new systems have raised complaints, however, from some workers who see the efforts to track their movements as excessive or creepy.

"They don't even have to hire someone to harass you anymore. The machine can do it for them," said Ed Ott, executive director of the New York City Central Labor Council of the AFL-CIO.

Gee, I wonder why union members would be so opposed to a system that requires them to actually be physically there to be counted as present?

Nearly half the entries made into the city sanitation division's time card system were fraudulent, resulting in employees' being paid for time they didn't work, according to a city audit released Friday.

Of the more than 3,000 "punches" made into the system in the Brush and Bulky Division in the past year, between 1,400 and 1,500 of the punches made by supervisors led to paying an employee for time not worked — a scheme called "buddy punching.".......

Deputy City Manager Mike Letcher and Assistant City Manager Karen Masbruch said one of the reasons city officials found out about the fraud was that employees in the West Side Division were lodging complaints about the unit's supervisor because he was not allowing them to buddy punch.

Posted by North Dallas Thirty at 6:08 PM No comments:

CubsTracks, Because You Know I Love All My Readers Edition

(Personally, I prefer the RJ Club mix version, but hey, you take what you can find on YouTube -- and the eye candy sort of makes up for it)
Posted by North Dallas Thirty at 2:24 PM No comments:

Sorry for the lag, folks; it's been a busy set of events.

One weekend trip back to Kansas to see the family involving not one, not two, but three tries by a clerk to find me a rental car that a) worked, b) was present on the lot when and where the computer said it was, and c) was about five grades over what I had actually rented.

One greeting to my husband: "Missed you, sweetie. I have to puke."

One new work laptop, necessitated by a fritz-out of the old one, on the day following my return when I would have loved nothing more than to work from home so I could lie in bed between puking and.....other.....but of course, couldn't.

And one crazy week of stretching Microsoft Excel to its limits so that my managers around the globe could abuse our network drive for the annual granting of plums and favors.

Maybe she was just trying to work her way through the Sunday Times.
Posted by North Dallas Thirty at 9:45 PM No comments:

....to the first person who correctly identifies from what source my tagline "If you don't do like you're supposed to, you're liable to be terribly interesting" comes.
Posted by North Dallas Thirty at 11:56 PM No comments:

and enjoy today's entertainment.
Posted by North Dallas Thirty at 1:47 PM No comments:

Slowly, ever so slowly, San Francisco is easing out of the three months of rain and general Seattle-esque gloom that we call a winter, and slipping into something a bit more comfortable -- the crisp mornings, balmy middays, and blissfully-calm evenings of spring.

A few thousand miles or so to the south, blog-buddy Kevin at Club Whirled is undergoing his own renewal cycle, which he is graciously sharing with us in a recent series of posts. In the spirit of his latest, I offer one of my recent favorites in heavy rotation -- apropos in what it says, and most emphatically so in what it does.

Posted by North Dallas Thirty at 12:34 AM No comments:

Mainly because HE did it. 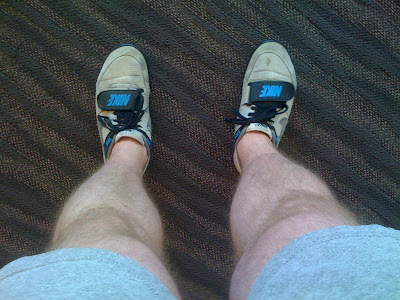 The interesting thing is that these shoes just turned 16 years old last month. They started out as my shot put and 35-pound weight shoes for indoor track and field in college (because I apparently needed something to occupy my late afternoons after football ended and before tennis started); once those four years were over, they've served faithfully as my lifting shoes ever since.

I was thinking that was pretty cool, that my shoes were old enough to drive -- until I realized the tank top I was wearing for the gym today could have cast its first primary vote last month.

Needless to say, my clothing replacement cycle runs on geologic time.
Posted by North Dallas Thirty at 11:30 PM No comments:

Nothing to See Here, Move Along...

after all, we know it's not a problem, all nothing but antigay public health officials and statisticians....
Posted by North Dallas Thirty at 8:52 PM No comments:

Because, you know, all the other problems of gay people have already been solved, so we can put all our effort and time into this......
Posted by North Dallas Thirty at 2:44 PM No comments:

On some level, you can't help but be impressed by its regularity.

It comes up with surprising frequency in all settings, with discussion, with debate, in words spoken, in words written -- any time the prevailing ideology of a minority is challenged by one of its members.

As a perjorative, you can't beat it. It is designed to effectively and completely undercut whatever argument another has, blowing away any support in a nuclear fashion by painting the person as the worst of all reviled creatures -- a traitor. Someone who has sold others out for their own comfort. Someone who lives in luxury while their fellow minority members starve and suffer. Someone who supports the system that oppresses their fellows.

And gays, being expert practitioners of minority politics, do the same -- against, not just people like me, but, through innuendo and insinuation, even noted gay authors who don't toe the party line.

But as it turns out, all that's displaying is how few of them have actually read the book -- as an article from Ferris State University's Museum of Racist Memorabilia demonstrates. Indeed, as Dr. Patricia Turner, whose book Ceramic Uncles & Celluloid Mammies is cited therein, points out, the prevailing view of "Uncle Tom" is, in fact, a perversion of the original; Uncle Tom, throughout Beecher Stowe's original novel, is held up as an example of someone who is courageous enough to endure horrible pain, and ultimately death, to stand up for what he believes is right and to protect those who have been treated unjustly.

Furthermore, as the article goes on to point out, if you've been called "Uncle Tom", you're in good company; so have individuals like W.E.B. DuBois, Louis Armstrong, Jackie Robinson, Bayard Rustin, Arthur Ashe, Cornell West, and even Martin Luther King Jr. himself -- all criticized and lambasted by militant and hateful people because they refused to excoriate white people and to keep silent about the wrongful behaviors in their own communities from which the Tom-callers were benefiting.

So in short, the next time you're called that, keep in mind that you're being compared to a man who refused to hurt others even when doing so could have brought him advantage -- and was willing to die to protect those who needed it.

Then think of the commentary it makes on the erudition and motivation of the Tom-caller.
Posted by North Dallas Thirty at 1:36 PM No comments: