Out Of Blog -- Or Into Several Others

Off to (probably NSFW) Lazy Bear.

If, in my absence, you find yourself unable to live without blogs, Jamie, QuakerJono, John, Matt and Robbie (and Rob), Rob a la carte, GayPatriot and GayPatriotWest, Army of Mom, and LabKat will be happy to satiate your urges.

That is all. Carry on.

UPDATE: And Jimbo. Never under any circumstances can we forget Jimbo. Aside from being extraordinarily erudite and sweet, he is SO dadgum cute......

And Chuck, who is also all three of those, but quite taken.
Posted by North Dallas Thirty at 8:01 PM No comments:

All They Need Is Love...and Sanctuary, and Protection, and....

As I've been writing about, San Francisco, in the name of "sanctuary" and "compassion", has been turning loose hardened criminals, with the inevitable consequences.

Now, it seems, the same is taking place on the national level.

Too often, when stories like these come up, people of my ideological stripe are claimed to be "lacking in compassion".

To which, as these examples point out, the response should be, "For whom?"
Posted by North Dallas Thirty at 2:08 PM No comments:

There's a great deal of hand-wringing going on today about the news on black US AIDS rates released yesterday.

Particularly interesting is this quote.

In areas such as Detroit, Washington D.C. and the Deep South, HIV rates among segments of the black community approach those of countries in Africa.

And yet, as I pointed out last year, the Democrat Party's leading lights deliberately blocked and eliminated the change to the funding formula for the Ryan White CARE Act that would have sent more Federal money to those areas based on their actual incidence rates and lack of existing resources. Instead, the formula previously used, which provides a disproportionate amount of money to coastal metropolitan areas like San Francisco and New York City, was left in place.

After all, which is more important; providing education, prophylactics, and medication to poorer and predominantly-black areas, or providing Grey Goose, caviar, and linen tablecloths for white gay liberals' fundraising galas?
Posted by North Dallas Thirty at 1:30 PM No comments:

For Providing a Service, You Must Be Punished

This is beyond entertaining.

My favorite line, from pro-life blogger Jill Stanek: "Were Tom Coburn aborting babies free instead of delivering them free, there would be no investigation; there would be an awards ceremony."
Posted by North Dallas Thirty at 1:14 PM No comments:

The Story You Didn't See Quoted in the Gay Press

And once you read it, you'll figure out why.
Posted by North Dallas Thirty at 12:52 PM No comments:

Day 3 -- NDT Goes Farther East, Back Into Childhood, Then Out Again

Day 3 dawned bright and sunny in Denver; at 9:14 AM, I saddled up the black steed for one more time and headed out across the Colorado and western Kansas plains. 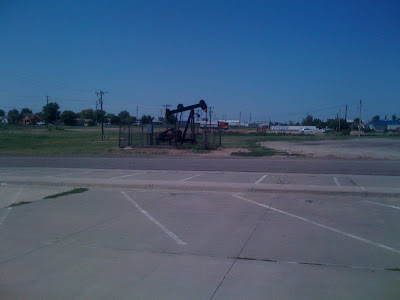 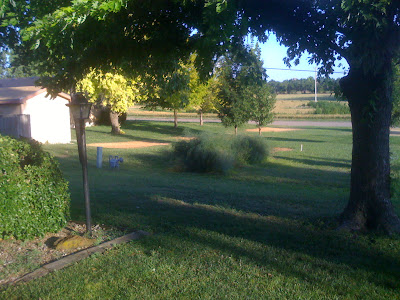 My grandparents' backyard. You can almost smell the roast beef and mashed potatoes cooking.

Final stop: NDT's folks' house, 9:31 PM -- twelve hours, seventeen minutes (although only eight hours and two minutes of actual driving, with the rest being eating, visiting, and eating some more), and 547 miles later.


(and oh yes, I flew back yesterday - with four hours of my life I will never get back again lost in LAX).
Posted by North Dallas Thirty at 12:03 AM No comments:

Day 2 started out infernally hot in Salt Lake City (insert your own religious joke here). Instead of following the mindless twisting ribbon of I-80, at 9:04 AM, I turned south towards Provo and then onto US 6, headed towards Grand Junction, Colorado -- where you pick up the more interesting twisting ribbon of the Colorado River.

Of course there was a photo op. 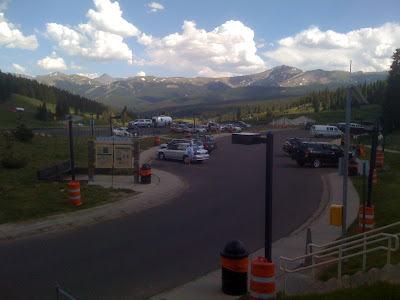 Fortunately, it was downhill (literally) the rest of the way.

As alluded to cryptically elsewhere, with my switch to a BART commute, my faithful Mazda3 is going to go live with my parents.

Problem is, it has to get to Kansas to do it.

Which is why, first thing this morning (7:20 AM Pacific), I piled a few changes of clothes, some snacks, and enough Muscle Milk Lites to fuel a small health club into the 3 and pointed it east. 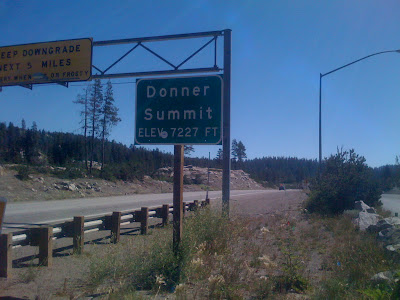 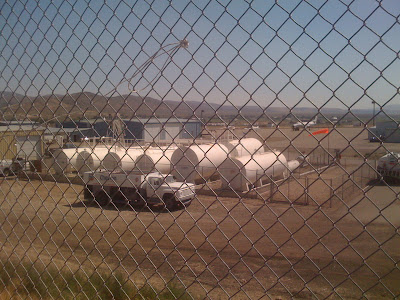 (Before you ask, yes, there was a second rest and fuel stop outside Reno, but really -- how many more slot machine and tour bus pictures does the Internet need?)

Honey, Would You Check the Washer?

Where's Kevin when we need him?
Posted by North Dallas Thirty at 10:01 PM No comments:

I am not alone.

What -- you thought this had something to do with politics?
Posted by North Dallas Thirty at 6:48 PM No comments:

However, as John can attest, that's not necessarily a bad thing.

Now, for a few from more recent times.

Posted by North Dallas Thirty at 1:26 AM No comments:

The History of the World in Autos

Mainly because Jamie did it first. Pictures are not the actual vehicles, but merely the best representations I could find of what they actually looked like. 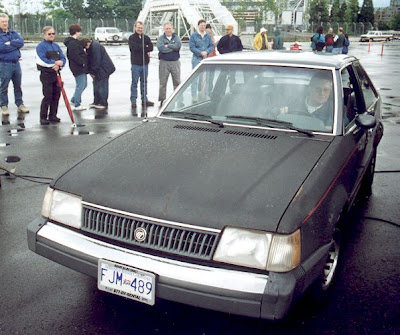 The first was a 1985 Mercury Lynx, aka Ford Escort, with four on the floor and featuring one option -- FM. The car had a double-size heater, but no air conditioning -- perfect for Minnesota, from whence it had come, but exactly the opposite of what was needed in the Southwest. The perfect car for a fourteen-year-old (farm kids get special license privileges); practical, plenty of space for fertilizer bags, and as much speed as 65 horsepower can summon. 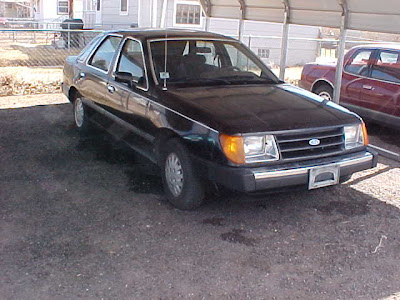 Next upsize: 1985 Ford Tempo GLS, this time with five speeds AND a cassette player -- which did nothing to make up for its similar lack of A/C. This car holds the record for most unbreakable; one of my cousins is STILL driving it. 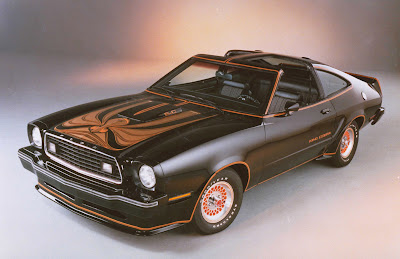 1978 Ford Mustang King Cobra. I swapped the Tempo for this to stop my grandfather in ice-prone Missouri from giving it to my grandmother to drive. Long story. Dumb luck winner; of the 5,000 of these that Ford made, only 500 had factory T-tops, and mine was one of them.

Which did nothing to lessen the sting of the $5,000 in restoration work I put into it (at a rice-paddy minimum wage charge for my labor). 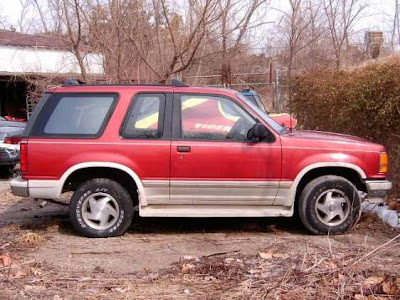 1991 Ford Explorer Sport (only in silver and black trim). My first new car, purchased because the King Cobra on ice was roughly akin to a hockey puck. It lasted twelve months before I got sick of it and its twitchy winter driving and went to a..... 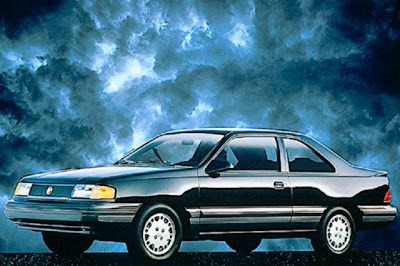 1992 Mercury Topaz XR5. This was an incredible car; phenomenal on snow and ice and with everyday bodywork hiding an engine, transmission, and suspension lifted straight from the Ford Probe. It could even dust the gaspy Camaros and Mustangs that haunted our little college town -- while carrying four people and their luggage. 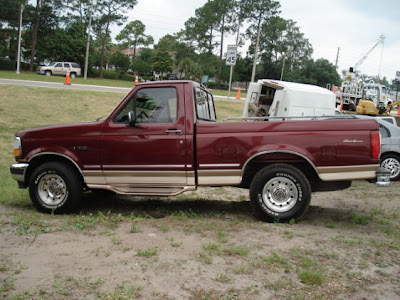 1996 Ford F-150 Eddie Bauer. Hands down winner for the Pretty, but Useless Award; my father, bless his good intentions, traded off my Topaz for this (without telling me), but the combination of a Ford inline 6 coupled to a 2.73 rear end meant that the only horse trailer it could pull was a mini. Hence, it quickly was replaced by a...... 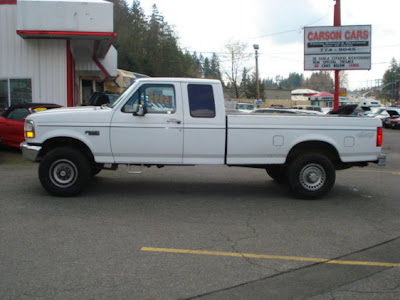 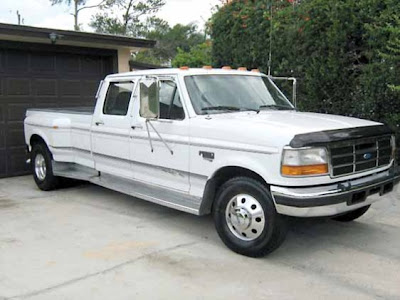 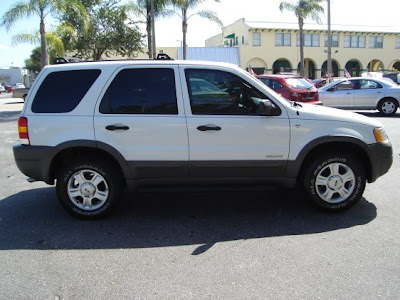 The 2001 Ford Escape was the result of two things; one, moving to urban Dallas, where the aircraft-carrier size F-350 would not fit into garages or parking spaces, and two, getting tired of being waved at by lesbians. Fortunately, because these things were so slow in getting into production, when I finally came back to my senses six months later, I sold it for more than I paid for it new and got a.... 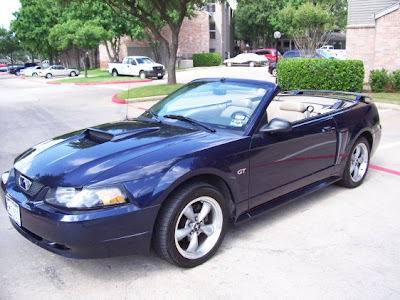 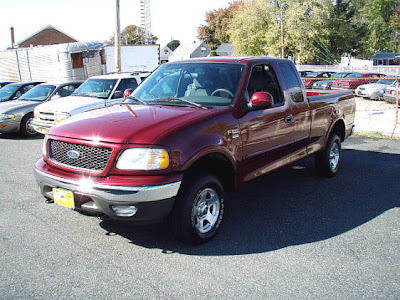 2003 Ford F-150 XLT -- the end result of my then-boyfriend persuading me that a butch cowboy type like myself looked better in an F-150.

Three weeks later, of course, we broke up.

This is where y'all came in. 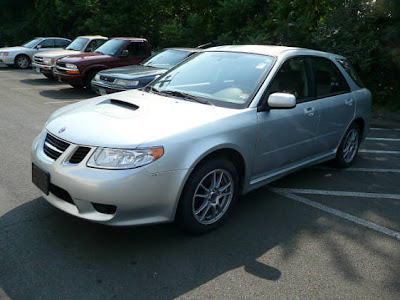 And you know the rest of the story.

Although, as it turns out, given my new BART-only commute, the Mazda3 is going to my parents, and the Geo will be the new standard-bearer for the once every two weeks I actually drive something somewhere.

I look forward to the simplicity.
Posted by North Dallas Thirty at 11:59 PM No comments:

Personally, I think it's two things:

1) Most Americans lack perspective on what really qualifies as hardship.

2) Primarily because the media is constantly telling them how awful their lives are.
Posted by North Dallas Thirty at 12:32 AM No comments:

First and foremost, the birth of the United States of America.

Second, the fact that, as of yesterday, I have completely paid off my car and student loans, making me completely debt-free.

Both officially kick ass.
Posted by North Dallas Thirty at 7:25 PM No comments:

Yes, Friends, It CAN Get Even Better

When federal law enforcement authorities demanded that San Francisco halt the flights and began a criminal investigation, the city decided to house some of the dealers in long-term youth rehabilitation centers. Some of those centers are run by a nonprofitcompany called Silverlake Youth Services in mountain towns southeast of San Bernardino.

Eight Honduran juveniles who had been convicted of dealing drugs in San Francisco were sent within the past few weeks to the company's group homes, where one month's placement costs $7,000 per youth - an expense borne by San Francisco taxpayers.

Within 10 days of being sent to the unlocked group homes, however, all eight youths ran away, said Bill Siffermann, head of juvenile probation in San Francisco.

Meanwhile, Mayor Gavin Newsom insisted that he doesn't "have the authority" to order around the head of the Juvenile Probation Authority and its oversight commission, instead claiming that "the courts" were the ones forcing these methods.

On the other hand, District Attorney Kamala Harris, who is responsible for prosecuting the criminals in question, could not be reached for comment -- probably because she's too busy trying to ensure that San Francisco's policies go national.

It makes one feel so good to know in a time in which the City is slashing services for law-abiding taxpayers left and right because of a ballooning deficit that it can not only afford punishment-free, expensive trips and vacations for its illegal-immigrant drug dealers and gang members, it can advertise for more of them.
Posted by North Dallas Thirty at 11:46 PM No comments: