As per the ersatz blogging "tradition" that on Friday, one should concentrate on matters greater than politics and put up pictures of beautiful things you care about, Fridays will henceforth be known as Dog Blogging Day on North Dallas Thirty.

For our first, I can think of no better subject than the late companion of Worthy Adversary Pam of Pam's House Blend, a Rhodesian Ridgeback named Red. I blogged a memorial piece for this noble canine earlier this week; here he is, remembered as a wonderful companion and a fine example of his breed. Many thanks to Pam and her partner Kate for sharing these pictures with us here and on her website. 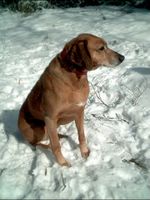 The Rhodesian Ridgeback is the result of interbreeding among several different breeds of dogs imported to South Africa (then known as Rhodesia) by the Boers, German and Dutch settlers who emigrated to South Africa in the 16th and 17th century, and the half-wild dogs of the Hottentot tribes that also inhabited the veld. The resulting breed is a unique combination of versatility and hardiness, able to hunt even the fleetest of game, defend against lions, and go for as long as 24 hours without water in extreme climates. Bred as hunters and as guard dogs, Ridgebacks tend to develop an extraordinary bond with their owners; while they can be quite stubborn and hardheaded, their native intelligence and excellent response to positive methods of training make them an excellent companion.

If you are interested in having a Rhodesian Ridgeback join your family, why not consider one who needs a good home? Both Ridgeback Rescue of the United States and Rhodesian Ridgeback Rescue will be happy to help you locate one. In addition, you will find that most reputable breeders are very involved with their breed's rescue organizations, so this is also a great way to meet other Ridgeback aficinados and locate your new best friend.

From the NDT Mascot and me....have a great weekend! Check out Pam's other gorgeous furry friends online as well.
Posted by North Dallas Thirty at 6:59 PM