One of the travails of travel when you share your life with a small furry friend like the NDT Mascot is finding a place for your buddy to stay when you're out of town. Fortunately, the Thirty is well-placed in a beautiful neighborhood full of dog lovers, all of whom are happy to have the Mascot over for a visit.

Perhaps HIS favorite to visit, though, is his next-door neighbor -- a sweet female, about thirteen, in her twilight years, but more than willing to play Norma Desmond to the Mascot's Joe Gillis (although with generally a MUCH happier ending). In Avea's honor, today's Dog Blogging will be on the noble German Shepherd. 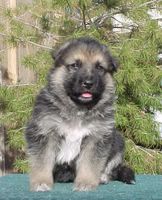 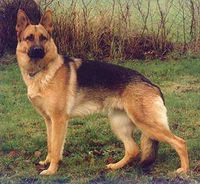 The German Shepherd as we know it today is primarily the work of Captain Max von Stephanitz who in 1899, building on the work of the earlier Phylax Society, purchased an exceptional dog named Horand von Grafeth and formed the Verein fur deutsche Schaferhunde (Association of the German Sheepdog, or SV). Under von Stephanitz's tight control, a program of line- and selective breeding, using careful crosses with sheepdogs from other portions of Germany, was begun to fix permanently specific qualities of the breed like ear and tail carriage, size, color, and temperament. This intense program was so successful that, within ten years of its founding, the SV was the largest single-breed dog registry in the world.

Von Stephanitz was aware that the breed could not survive as a sheepdog; thus, his next campaign was to demonstrate that the same qualities of bravery, intelligence, and hardiness that made German Shepherds such excellent herders could also put them to excellent use in government service -- and with the onset of World War I, the German Shepherd proved these qualities to both sides. When recognized as a separate breed by the English Kennel Club in 1919, the name "German Shepherd" was replaced with "Alsatian Wolf Dog" to avoid the taint of "German" -- which is why German Shepherds were often referred to as "Alsatians" in English reports and literature.

As befits von Stephanitz's original vision, the German Shepherd is by far the most popular dog for use in police, rescue, and service work, for which its steadfast and steady temperament and high trainability is well-suited. Because of the breed's relatively small degree of genetic diversity, it is susceptible to inherited bone and joint difficulties (dysplasias); this has been heightened by careless breeders attracted by the easy money to be made in churning out puppies. Still, the German Shepherd makes an ideal and active pet, a a blue-blood born with a regal bearing, who gives his or her loved ones the most intense devotion and protection for which one can ask.

A book I recommend for any dog lover is First Lady of the Seeing Eye by Morris Frank, which details his experiences and travels with his guide dog, a German Shepherd he named Buddy, as well as their establishment of the first guide dog school in the United States and their relentless campaign to get service dogs allowed into all public spaces. If the final pages don't make you cry, you don't have a heart.

As always, if a German Shepherd sounds like a good match for you, please contact the American German Shepherd Rescue Association. As always seems to happen with a "popular" breed, there are far too many German Shepherds abandoned after they outgrow their cute puppy stage, or when their owner's failure to train them results in "bad" behavior; all they need is a good home, and you can provide it.

From me, the NDT Mascot (aka Gigolo), and his sweetie Avea....have a great weekend!
Posted by North Dallas Thirty at 7:16 PM