That's right......169 years ago today, on March 2, 1836, the Texas Declaration of Independence was adopted at Washington-on-the-Brazos, just south of modern-day College Station. With this Declaration, Texas ceased functioning as the Mexican Department of Tejas and became the new Republic of Texas.

After the Mexican Revolution of 1821, which established Mexico's independence, Jose Antonio Navarro, the mayor of San Antonio de Bexar (modern-day San Antonio), who had fled to the United States after participating in a Texian revolt against the Spanish central government in 1813, but had returned to Texas, began to assist Stephen Austin, a US impresario, in bringing Anglo settlers and recent immigrants from the United States to the Texas area, drawn by land grants of 4,000 acres in return for becoming a Mexican citizen. Navarro's motivation, in connivance with Austin, was primarily to settle the land quickly enough to assure a considerable degree of autonomy from the central government; they largely succeeded, even after the banning of new immigration and the creation of the new state of Coahuila y Tejas by the progressive Mexican Constitution of 1824, which established Mexico as a federal republic almost identical in structure to the United States. However, after General Antonio Lopez de Santa Anna's ascension to the Presidency of Mexico in 1833, the situation deteriorated; Santa Anna, out of distrust and an obsessive belief that the United States was planning to invade Texas, tightened centralized control, dissolved the state legislatures and abolished the constitution, including the guarantees of political freedom for the Texans. The Anglo and Tejano settlers rebelled, and immediately repelled an invasion force of 600 soldiers from the Alamo mission outside San Antonio de Bexar that had been sent to pacify the city, enraging Santa Anna.

At nearly the same time that Navarro and other delegates were leaving for a gathering of Texas leaders at Washington-on-the-Brazos, Santa Anna was advancing on San Antonio de Bexar. The defenders of San Antonio de Bexar, Anglos and Tejanos, barricaded themselves in the Alamo, in defiance flying a flag emblazoned with "1824", in reference to the Republic of Mexico as a reproach to Santa Anna. Meanwhile, at Washington-on-the-Brazos, Navarro, among others, signed the Declaration of Texas Independence, decrying Santa Anna's attack on liberties and declaring Texas an independent republic -- ultimately the only independent republic recognized by foreign governments to be admitted to the United States. 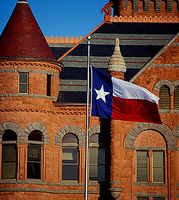