Some people have a weakness for spirits, some for tobacco, and some for barely-legal boiz.

In my case, it's four wheels and an engine.

Ever since moving to California, I've wanted a convertible; however, buying a new car when your current one is barely broken in makes zero sense unless you run in circles far more prone to alcoholism and eating disorders than do I.

The solution: a second car. But not just any second car; a convertible that can climb hills like a mountain goat, is reliable, can get into our downhill garage without leaving its exhaust pipe on the berm, and that doesn't cost enough to require a car payment. And, while we're dreaming, it has to be fuel-efficient, parkable in a postage-stamp space, and not look like Skipper should be sitting in it waiting for Barbie to come out of the dress shop. 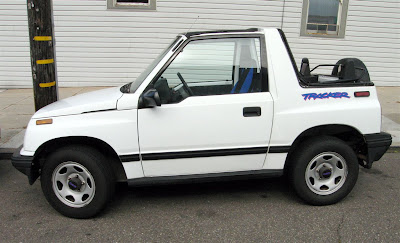 A Geo Tracker, to be teddibly precise.

Yes, as you might expect, it's noisy, it's as fast as eighty horsepower gasping through a California emissions system cannot be, and at 2,189 lbs, it has only slightly more resistance to wind gusts than Nicole Richie. But it hauls up Twin Peaks like a trouper, it glides into the garage with ease, and at 142.5 inches -- a full three inches shorter than a Mini Cooper -- it fits anywhere.

And there's the fleet. With the Tracker to pull around-town and fun duty, the Mazda3 gets all rested up, ready to be turned loose for some serious speed on the open road (or as euphemistically "open" as the 101 ever gets). Best of all, since the Geo is more efficient in the city and the Mazda on the highway, I have actually increased my net gas efficiency as a whole, thus doing my part for Mother Gaia and Manbearpig.

But the jury is still out on the whole Skipper thing.
Posted by North Dallas Thirty at 12:44 AM