A Declaration of Truce

On this date, Sunday, 9 January, 2005, I, "Jeff", in the presence of God and distinguished witnesses of the blogosphere, do hereby declare that a state of unilateral truce, aka a temporary cessation of hostilities, exists between myself and my blog and the assorted entities identified as the Human Rights Campaign (heretoafter referred to as "HRC"), until such time as no greater than or less than thirty days after the assumption of responsibilities by a duly-chosen individual as the Executive Director of HRC.

In short, I'm not going to bash or criticize HRC until thirty days after they get a new Executive Director. I will continue to report salient information on the process, but will refrain from making editorial comments.

This may come as a shock to some of you familiar with my past record, in which I have been critical of everything HRC from their endorsement of antigay Democrats to their overfocusing on Beltway events to the detriment of field activity to their administrative follies, including their tin-eared decisions to name two Democratic lobbyists, one of whom isn't even gay, as interim co-directors of a "bipartisan" organization, and to originally attempt to keep secret the names of the search committee for a new executive director. I also heartily agree with Christian Grantham, Charging Rhino, and others taking HRC to task for its screwy membership numbers, penny-pinching on field voter education, and the Axis of Chardonnay mentality that pushes them closer and closer to, as Dale Carpenter eloquently put it, continuing "their distressing slide into irrelevance". None of my views in these areas have changed.

However, I think it is best at this time that we all sit back, be quiet, and let HRC make a decision, for three reasons.

First, the point has been made. HRC has serious issues in both its values, its governance structure, and its organization that are adversely affecting both its message and its effectiveness. I believe that everyone in the gay community is aware of that fact and that further repeating of it is both unnecessary and counterproductive.

Second, we are in danger of scaring away qualified candidates. Right now, I can't think of a single person who is qualified to lead HRC that would be crazy enough to take on the job, with all the stuff flying around the blogosphere and media about it. It needs to be demonstrated that whoever is chosen will get a fair chance to prove themselves and will not become a dart board during the selection process or on their first day in office. Under my plan, HRC chooses the candidate and they get thirty days to impress us.

Finally, this is, in my opinion, the most effective means of putting pressure on HRC's search committee and board to do the job right. If they are subjected to a constant barrage of criticism during the process, my fear is that they will, rightly or wrongly, blame that for any bad choices that they make. This approach gives them no excuses and just enough rope that, if they choose to, they can hang themselves.

I would ask my fellow blog allies and bloggers to join on to the truce as well if it suits them. 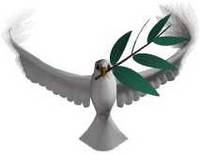