GayPatriot, that tireless defender of truth, justice, and the American Way -- and one of my staunchest blog allies -- has finally outed himself....as a KANGAROO EATER (GASP). Apparently GP discovered this (symbolic) rip in his spandex during a recent trip to the Land Down Under....the horrific details are as follows:

Well, here's my confession. Kangaroo meat is awesome. I'm ashamed to admit it... but I've been craving more of it since we got home. I ate it at nearly every restaurant we went to during the trip. I mean it is GOOOOOOOD.

While this will no doubt throw PETA into a tailspin, having sampled the delectable treat myself, I understand GP's lust -- kangaroo's got a great flavor, and it's relatively low-fat in comparison to other meats. However, I'm hoping he manages to keep his cravings in check...... 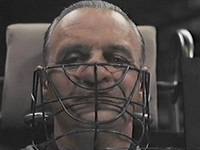 Roasted eggplant and a nice Shiraz, anyone?
Posted by North Dallas Thirty at 8:40 PM